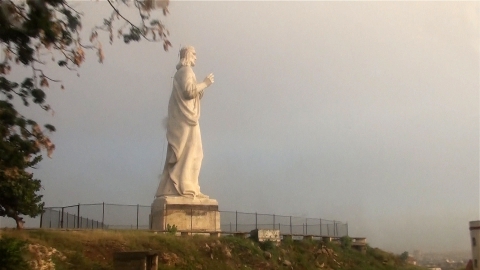 "In the Cabaña, back in those days, there were three main stakeholders: He who was shot, he who killed and me, god's clown, trying to offer what I could not-".

The Cabaña was the Fortress of Havana; When: the first five months of 1959, that is, the first steps of the Cuban revolution;

Those executed: soldiers and police officers of the Batista regime;
The executioners: the fighters who had come down from Sierra Maestra;
God's clown, trying to convey his worn-out faith: Javier Arzuaga (Oñate, 1929), a Franciscan friar.

There were many well know characters there, one of them was the Che Guevara, who back then was the commander of La Cabaña.

After having kept all of his troubled life experiences to himself for over forty years, Arzuaga decided to put pen to paper. His book 'At midnight', stems from here as does this documentary presented by Angel Gonzalez Katarain.

Arzuaga accompanied fifty-five people in the days, hours and minutes prior to their deaths, and even during actual shootings. He refused to confess the convicts- he was not interested in their truths-; his role was to convey valour on that inescapable last trip.

Among this collection of stories is the one where the commander who was to be executed, asks his wife to bring him his unused, brand new shoes. Or the case of Ariel Lima, accused of treason: he had worked with revolutionaries at the age of sixteen; at nineteen he was beaten up by the Batista police force; the Che, without giving it a second thought, sent him to the wall. On one occasion, Arzuaga himself had to hold a captain’s hand because he was unable to administer the coup de grace. There is also the case of the non- believer who was about to be executed and begged the Franciscan to lend him his faith so he could be executed.

'A la medianoche' is above all, a first-hand witness view into a dark episode in history. In any event, the Basque case is not limited to the Cuban one; this work goes far beyond that. Based on the executions at La Cabaña, it universalises the issue of the death penalty; not from doctrine, but from the pain and compassion that will never be forgotten.

Angel Gonzalez Katarain is a sound engineer, musician and Basque audio-visual producer. He has his own recording studios located in Azkarate (Navarra-Spain). Since 1980 he has been heavily involved in a myriad of projects within the world of image and sound.
In 2010 he became the main promoter of Seeds in time, a historical research project that seeks to audio visually rescue and display the influence of the Basque culture in other parts of the world.
www.semillaseneltiempo.com
http://vimeo.com/angelkatarain/
https://www.facebook.com/angelkatarain
https://www.facebook.com/semillaseneltiempo
www.angelkatarain.com