The coming of (Middle) Age journey of Nina, a naive, neurotic Good Girl trying to be Bad, as she embarks on the rocky path to rediscover love and life again in the fast lanes of New York City.He took away her virginity at 16 and 25 years later left her feeling like one.

New Yorker Joanna Bonaro wrote, produced and stars in “Good ‘n Screwed,” a half-hour series about the trials and tribulation of a woman suddenly divorced and back in the dating pool. A self-confessed “Sex And The City” fan, Bonaro has cast a perfect tale for today directed at women over 40.

Bonaro is a Native New Yorker, who grew up in The Bronx. She often portrays ballsy, yet vulnerable blue collar wives, moms and cougars, according to her official biography.

She’s best known for her roles on “Law & Order: Special Victims Unit”, “The Sopranos”, “BoardWalk Empire” and “Mozart in the Jungle.”

‘Good ‘n Screwed’ comes from a desire to create a female role that until now, does not exist. She is the prototype of the women who I see and know every day who are vital and interesting but who do not think that they are represented or understood in the industry. I am often told by women who have privately seen the pilot, ‘I like her, I would watch her, she is very much like me.’ So I am giving those women, a character they can identify with, relate to and root for.

I was inspired to create this series by my many female friends who are divorced, widowed, or who have never married. One friend was married for 25 years when out of the blue, her husband divorced her; another career woman never dated and now feels like a novice. Then of course, there is always the question about sex. These women now confront the daunting task of dating after 40 and feel overwhelmed in this Tinder based, market yourself on Facebook world.

I loved ‘Sex And the City.’ My show, in a way, is for the woman who loved that show and watched it, but who now is older, perhaps, still single, widowed or divorced. She is in a different place and is wondering: ‘Is this it?’ ‘Is this all there is?’ Or, if she is married’ is she thinking: “What if?’ And, wanting sex, having sex and getting naked at 25 is very different than 45.

Baby boomer women represent a significant portion of the buying public – they know they are smart, attractive and still very significant – and are feeling highly neglected. I decided to try to change that. 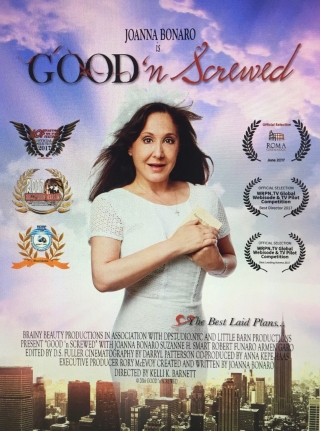