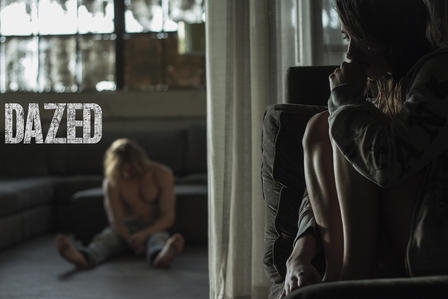 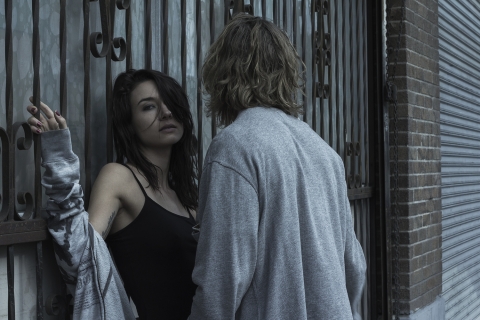 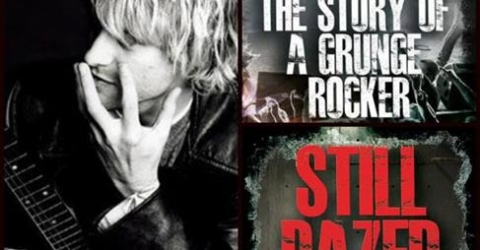 Synopsis:
"Overwhelmed with talent, one young man's struggle between the nightmarish world of addiction, his music and the woman who forces a choice."
Artiste extraordinaire Eric Peterson bonds on the Portland streets with fellow runaway Wink and their relationship grows as she tries to help him cope with his burgeoning musical talent during the early 1990’s. Unable to discard the pain from his short, angry life, Eric climbs brutally through the world of drugs losing his grip on Wink’s unconditional love and extinguishes his artistic brilliance in a world that hates junkies. Based on the DAZED Novel Series by Nikki Palomino, DAZED the film captures visually how nothing can stop a junkie from securing his next blast of smack. Eric’s journey to self-discovery might be too high a price tag to pay. Inspired by the ramblings of three junkies during the grunge rock era, DAZED proves no one can say with certainty which road awaits around the corner.

Nikki Palomino - Producer/Author   As a runaway, from the streets of NYC to the Strip of L.A., Nikki spent her youth as a grunge punk rock musician, racking up the confusion, frustration and passion leading her to write DAZED (The Story of a Grunge Rocker), the first in a series of novels about the drug and music culture of the '90s. She learned life, drugs, and alternative music, while touring in a van packed with the rest of the band, equipment, and groupies, playing infamous clubs like CBGB's.   In 2003, Nikki was named Writer's Digest's Best Genre Short Story Writer. She has written stories for print rags, including Nightmares and Blonde on Blonde, along with erotica for Foggy Windows. She has also covered rock and country music for various rags, including Los Angeles Country Examiner, Buddy Magazine and Blast. She studied under feature writers at both the Houston Chronicle and the Houston Post.   Nikki was co-writer and co-producer of Palomino Sisters' 2004 film noir, Baby, and the award-winning dark comedy from 2007, The Rug.   She is currently teaming up with Steven M. Kalish to write the non-fiction crime book "The Last Gentleman Smuggler". "You've had the Cocaine Cowboys, George Jung, Barry Seal, the Hippie Mafia, and the Biggest Pot Dealer in New York City's History, now you've got Skip, the fulcrum between Panama, Colombia, the US War On Drugs, Rock 'n Roll and Beautiful Women."

David Brakett , Lead Actor, Born in Knoxville Tennessee, the youngest of three brothers and one sister. He studied acting in Tennessee until he moved to Miami where he was signed by Wilhelmina Models. There he continued to study acting at The Acting School of South Florida. After Florida he made his way to California to continue to study and pursue an acting career. Within his first year in Los Angeles he secured a lead role in a feature film and several commercial spots and television roles. He has captured a supporting role in Showtime's TV Series, "Shameless", Season 8, as the character Duran. David jolted audiences with his role as a Troubled Cowboy in the Film "Jenny".

Cortney Palm, Lead Actor,  Theatrically trained, Cortney has played roles from Moliere to Lillian Hellman while in her undergrad at California Lutheran University. She quickly gained acclaim in the film industry with her titular role in Sushi Girl catapulting her into other memorable roles such as Maria who gets thrown into a wood chipper by a deranged Santa Claus in Silent Night and lead roles such as Daniela in Tourbillon and Zoe in the comedy-horror (with a viral trailer) Zombeavers. Cortney is also known for her appearance in The Purge: Anarchy.   During her undergrad, Cortney studied classical theater from around the globe on up to film acting techniques with Joshua Finkle and Michael Caine. She was nominated for an Irene Ryan Award for her performance in the Black Box production of TAPE, and was awarded Best Actress and Best Supporting Actress by her peers for her performances during school. Once out of school she trained under Yonda Davis at the Ivana Chubbuck acting studio, and Rick Walters at Theatercraft Playhouse.   With a masters degree in forensic psychology, Cortney blends the danger of a young Angelina Jolie and the grace and beauty of Audrey Hepburn. Cortney is able to hone in those skills and make her CIA/Detective characters come to life with that experience for roles such as Evelyn in Paradise and Kate in Bond of Justice: Kizuna (2017) where she utilizes her gymnastics background to perform her martial arts stunts.

Ezra Spurrier - Director, Cinematographer, Editor,  Ezra Spurrier is a photographer and filmmaker, with over 10 years of experience. Originally born and raised in Pennsylvania, he relocated to California in 2001 to study film-making and photography. As a photographer and video director he has extensive experience in shooting fashion, portraiture, documentary, commercial, and creative concepts.   Ezra’s work has been featured in print and online publications such as Vogue Italia, Glam Couture, Stonefoxx, Curve, Skorch, Arsenic, and Cliche, among others. Commercial clients include Samsung, Disney, Prius, M.Spalten, American Bars, Bunglaow LA, MagnetPAL, Pink Ice Energy, Gourmonde, Barchescho, Weiland Brewery, i.am.her, and Splash Fruit. He has worked on photo and video projects with musical acts such as Kacy Hill, Amanda Dilks, Nicki Aycox, Meghan Tronjes, Sevendust, Crywolf, Trenchtown, Alchemy From Ashes, Tyler Moon, Marisa Guterman, Matt Von Roderick, Actress, State Shirt, and Uncharted Shores.   He is currently based near Los Angeles, in Pasadena, CA.

Jason Herring, is with CBS' Mike & Molly, formerly with Will & Grace American TV.

Michael Wuerth - Songwriter, Producer, Engineer.   Songwriter and Vocals for  My Son The Bum   My Son The Bum is a studio band.   Two albums 'Beyond Therapy' and  'Are We There Yet?' are both on Wig City Records.