A lethargic Indian chief threatened by his “feed me or die” wife purloins a graveyard whose tenants follow a simple rule “What I take to my grave stays in my grave.”

Sioux chief EAGLE EYE and his brother LONG STICK visit an Indian burial place and loot TWO BLADES’ grave, who, after they leave, awakens from the dead. Eagle Eye brings the jewelry to an army fort, led by Captain MILLER, and trades it for much-needed supplies.

Eagle Eye is almost executed by his tribe while at the fort, Two Blades improvises a night attack and takes back his stolen property. Medicine man SHORT MEMORY helps Eagle Eye to find him a new squaw since the old one (WHITE FEATHER) constantly tries to kill him. Long Stick helps Eagle Eye to remove White Feather when Miller visits the Indian village, drops his bait, and forces Eagle Eye into action. The Indian brothers empty dozens of graves at the Indian burial place, and after they leave, Two Blades appears and summons all robbed Indians back to life. Both Indians trade their treasure for much-needed supplies and, on their way back, evade Two Blades’ walking-dead war party that marches at the army fort.

Two Blades’ war party attacks the army using tactics that do more damage to the Indians than defenders of the fort while Eagle Eye plays “catch me if you can” with the dead Indians and delivers them back to their graves. Eagle Eye prepares for his wedding when White Feather, still dead, pops up, and Eagle Eye burns the breeze from his village. 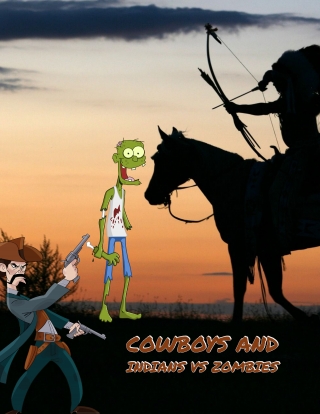