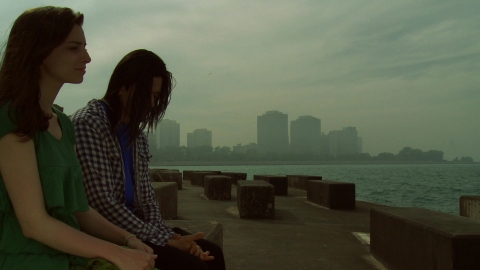 Alchemy in Hyde Park is the first digital feature-length fiction film shot and set entirely in the neighborhood of Hyde Park (Chicago, IL). It is an esoteric drama about four Chicagoans (Mira, Rumi, Franco, and Louise) who help one another grow through friendship.

Robert Beshara is both an academic and a fine artist.

As an academic, he is an instructor of psychology and a doctoral student in Consciousness and Society at the University of West Georgia.

As a fine artist, he prefers the label 'Transdisciplinary Nartist' and he has experience in the field of theatre, music, film, and writing.

Symbolism plays a major part in the film. I have devised something called the System--unrelated to Stanislavski's "System"--while working on Alchemy in Hyde Park. It is basically an abstract system of correlations between colors, characters, numbers, days, planets, astrological signs, chakras, musical notes, elements, and Tarot cards.

The film was inspired by Wassily Kandinsky's Concerning the Spiritual in Art as well as Mike Figgis's Timecode.

The film starts with an architecture montage of Hyde Park to establish the setting, but also to pay homage to the aesthetics of said neighborhood. Hyde Park is introduced as the first main character in the film because it is the space where the four other characters meet and interact. Hyde Park is a very significant neighborhood historically and culturally, and as of now there has not been any feature-length film that was shot entirely there, and which is also dedicated to the neighborhood. The writer/producer/director of Alchemy in Hyde Park lived in Hyde Park for 3 years and he fell in love with it to such a degree that it became his second home in his heart.

Hyde Park has been featured briefly in When Harry Met Sally and other such films, but does it not deserve its own movie?

Perhaps Hyde Park, London and even Hyde Park, NY--think of the recent film: Hyde Park on Hudson--are more famous than Hyde Park, Chicago, but the latter is notorious for being the home of the University of Chicago, Chicago Pile-1, Robie House, and Barack Obama among other historic places and people.

Enough said about Hyde Park, now onto the other four characters. The film is a drama about four Chicagoans who meet, get in conflict with one another, and become friends. They are Rumi: a literature professor who has not dated anyone for years and who struggles with alcoholism, Louise: a barista, martial artist, dancer, and student of East Asian literature who is also a survivor of sexual abuse, Mira: a painter and a yoga instructor who lives up in the clouds, and finally Franco: a mover who occasionally busks on the street and sells weed.

The film is not a traditional drama, hence, why I called it an esoteric drama. In terms of temporality, the film takes place between the present, memories, dreams/nightmares, and fantasies. And this is reflected in the editing of the film, which sometimes gets choppy and fragmented to stress the non-linear experience of being, that is, how we get bombarded not only with conscious imagery but with unconscious imagery as well.

To say more about the esoteric aspect of the film, the alchemical aspect has to do with the catharsis that the characters (and hopefully the audience) go through as they transform from more selfish to more selfless, which we intuitively understand as friendship, that is, prioritizing the collective needs before our individual desires.

Inspired by Jodorowsky, Bunuel, Lynch, and other surrealists, I wanted to audio-visually capture not only what the characters go through externally/socially, but also what they go through internally/psychologically. And to draw connections between conscious and unconscious elements in the characters and in myself, I attempted to do so via what was labeled above as the System, which in essence is highly symbolic and esoteric.